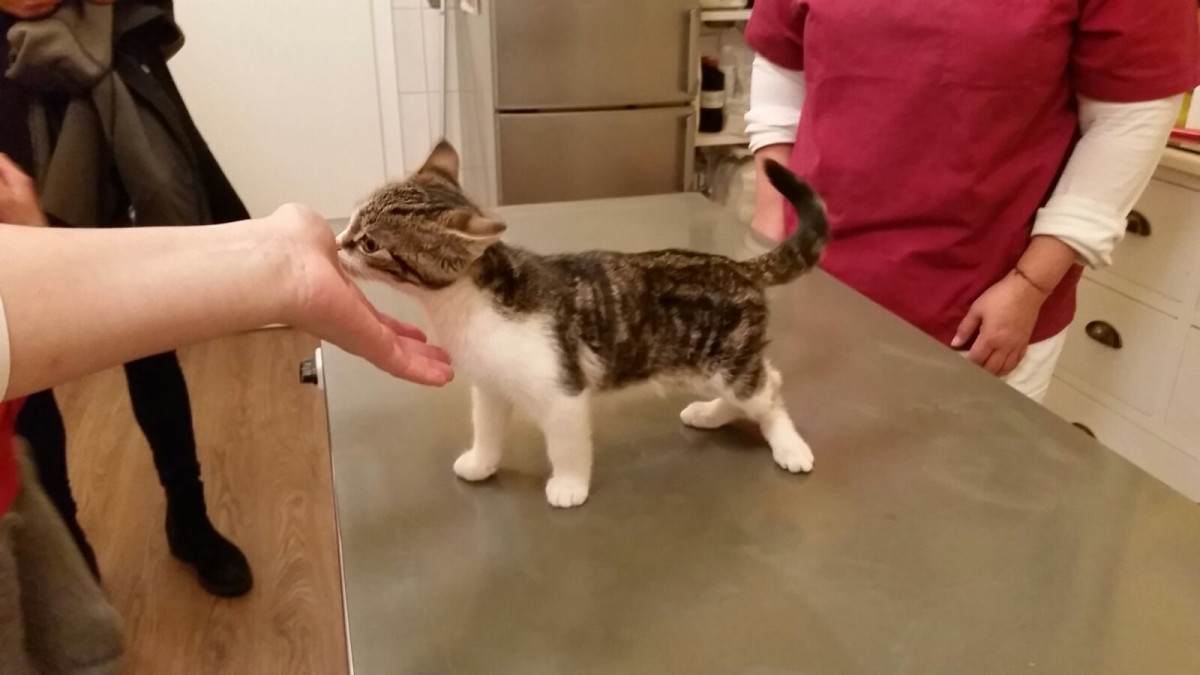 The story of little Lany is amazing and so we decided to put it on our blog, even if she is not looking for a new home.

On October 12th 2016 around noon we received an emergency call in the practice. A young girl reported a massive injury of her eight weeks old kitten which had by accident been clamped in the door of the dishwasher.

When little Lany then came to the practice together with her family she was a somnolent shock patient. At first glance we had the impression that there was no more rescue for her. However, after discussing with the family and considering the fact that the kids felt guilty for what had happened we decided for a stationary admission and to start with different therapies.

After providing first aid and intensively treating the shock symptoms it became soon evident that Lany would survive. However, on the second day she showed a complete and persistent flaccid paralysis of the back legs and the tail. Even if her general health condition was continuously improving and even if she was full of hunger for food and life a persisting paraplegia would have led inevitably into euthanasia. Scientific literature as well as consulted neurologists and orthopedist forecasted a very poor prognosis. Nevertheless the x-ray had prooven that the spine wasn´t broken which provided some hope.

One week of medication, k-laser and physiotherapy later we realized some progress and certain reflexes seemed to return. However, the back legs were still not used and the bladder had to be emptied manually several times per day.

With time Lany gained incredible agility by just using her front legs dragging the back legs on the ground. After an additional recovery period of another three weeks accompanied by intensive therapies certain mobility returned in the back legs and the tail. At the time when Lany was released to homecare she was walking, still wobbly but on four legs.

Another three months later she returned to the practice due to her permanent inability to control her urination and defecation which is a condition almost impossible to handle in a city apartment (without garden). It goes without saying that Lany had become dear to our hearts and so we restarted therapies. We acually managed her impairments quite well in the practice setting. Lany is now one and a half years old and has progressed impressively. Despite her severe trauma we will not give up on her. Neurologic patients often times show small improvements even after an extended period of time. Her family and also we thought about looking for a mere outdoor home for her where the incontinency wouldn´t matter that much.

However, Lany has decided differently: she feels perfectly at ease in the practice. She will stay with us, in the practice during the week and at home and in the garden on the weekends. In 2017 we diagnosed a luxating patella on the left knee which was finally frixed. After a longer recovery period the operation turned out to be very beneficial and her gait pattern has additionally improved ever since.