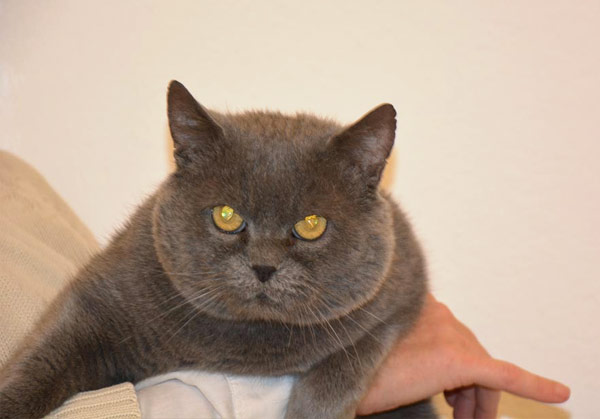 Sadly we need to announce that our beloved Tomcat James has left. Our acquaintance started when he was a patient in Veterinary Practice Schwarzspanierhof. However, he decided to stay with us for the rest of his life. We don´t know his exact age but looking at his medical record we may state that he has been an elderly tom already when he came and that he overall enjoyed a long lasting cat´s life. In addition to his chronic diseases he eventually developed a carcinoma of the right lung. With a heavy heart we decided to release him from suffering once he had stopped eating and finally showed problems to breath freely.  We chose a sunny spring day for this in order to let him have an extended final sunbath in front of the practice beforehand…

Not only us but many of our clients and for sure also our consulting vets miss Sir James. Some of his behaviors will never be forgotten. For example when he used to sneak into our patient´s carrying bags qnd causing lot´s of laughs doing so. He loved to sit on the windowsill in order to keep a close eye on things from above. Customers who visited the practice for the first time often did not even realize him before he finally rose and moved somewhere. Reguarly he walked across the room and climbed on the desk looking for his favorite treats and more than once he killed our coputer system by operating the keyboard or or taking a rest on it. Whenever the bustle in the practice was to much for him he would turn his back on us and the world and demonstratively stared into the corner of the room.

The story of tomcat James is very special and inseparable associated with the story of Veterinary Practice in Schwarzspanierhof. One may rightly claim that he has essentially contributed to the building of the practice. He was one of our first patients and he was there to stay. With his attitude he was able to enchant many, many pet owners but not least also us. He gave us motivation to work and offered very special consolation to our clients more than once. This cool grey tom had occupied the office from his first day on and it is hard to imagine that we will no longer be welcomed by him when entering the place…